The Frog Graham Round

The Frog Graham Round is an alternative take on the famous Bob Graham Round invented by a gent called Peter Hayes and designed for amphibians. It involves over 40 miles of running/walking/crawling, 15,750 feet of ascent/descent and four open water swims. The start and finish is at Moot Hall in Keswick, a tourist information office for normal folk and a holy shrine for fell runners. The Frog Graham can be done unsupported or, if you prefer, you can bring your friends.

Supporting cast in order of appearance:

It was my boss Neil who told me about the Frog Graham and I was captured by the idea of the journey through the north western area of the Lake District. All I needed to do was get a good team together to help me on my way. The date was chosen based on daylight hours and a full moon. 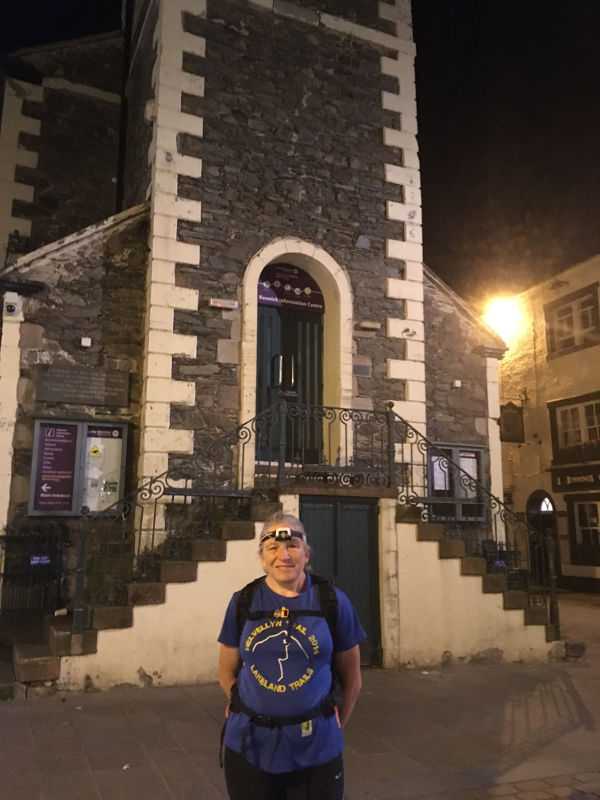 “Going for a run” he asked.

“Doing the Frog Graham” I replied.

“The f***ing Frog Graham!” he exclaimed.

“The f***ing Frog Graham” I confirmed.

He hugged me and shuffled away muttering something about fell running nutters.

2am and we were off. David ran with me for the first half hour and then headed off to pick up Stephen and meet me on the other side of Skiddaw.

I was alone. It was dark, quiet and warm.

I really enjoyed the climb up Skiddaw: route finding immaculate; sun rising to the east; moon shining to the west and the twinkling lights of Keswick below. At the summit I was as happy as could be and then I started the difficult descent down Carl Side. I had recce'd this route with company in daylight and found it unpleasant; alone in the early dawn, I felt so very vulnerable. Near vertical scree negotiated, the ridge down was a joy and I was soon at the road crossing where I met David who ran with me to Bassenthwaite Church, arriving slightly ahead of schedule. 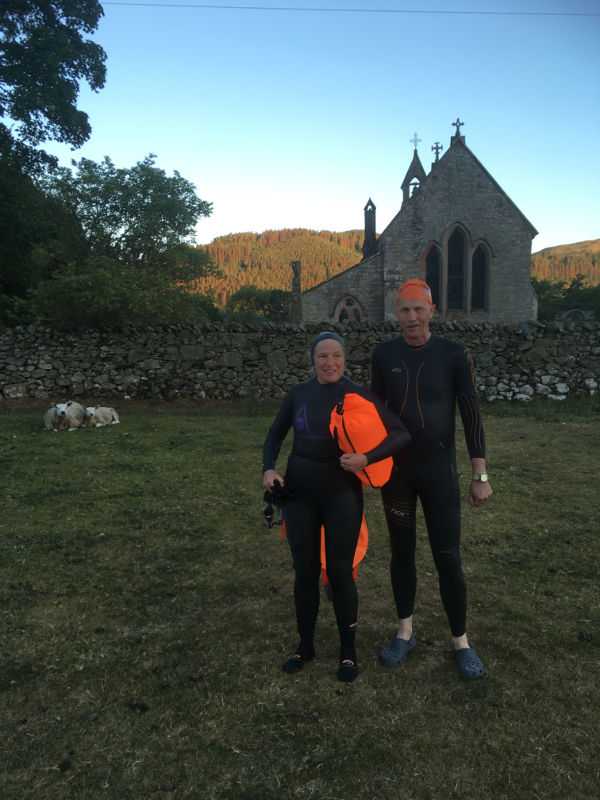 Stephen was waiting already in his wetsuit and off we went for our first swim across Bassenthwaite Lake. The water was much warmer than I had expected and a bit more choppy in the middle than I had hoped, but we were soon across and ready for Leg 2. 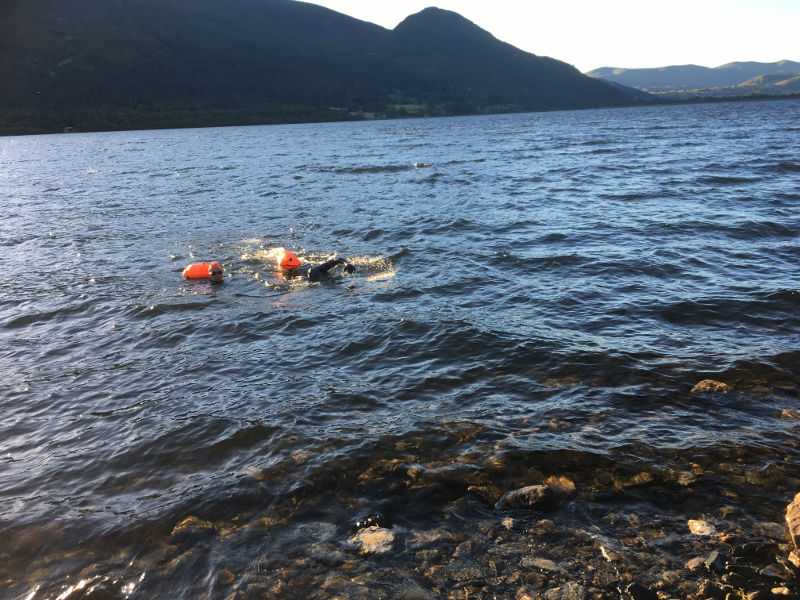 This leg is the longest and in an area much less familiar to me. For this reason I had enlisted ace navigator Julie to help. Julie had thoroughly recce'd the route and I was confident that she would not lead me astray. Neil, also unfamiliar with the area, joined us for leg 2.

It was still early but the temperature was rising alarmingly as we set off on the first climb. The views were simply magnificent and I guess we spent a bit too much time admiring the scenery. However, at the top of Grisedale Pike it was apparent that we had a problem. Julie was really suffering with the heat and began to feel very ill. She was concerned that our slow pace was eating into the schedule and so an executive decision was made. Julie directed Neil and me towards the next two summits and then met up with us in the saddle before Crag Hill. She then sent us on our way with a firm reminder not to miss out Wandope (which is, apparently, easily done). Fortunately we had excellent visibility and with the help of Neil’s nifty watch thing we reached each checkpoint. 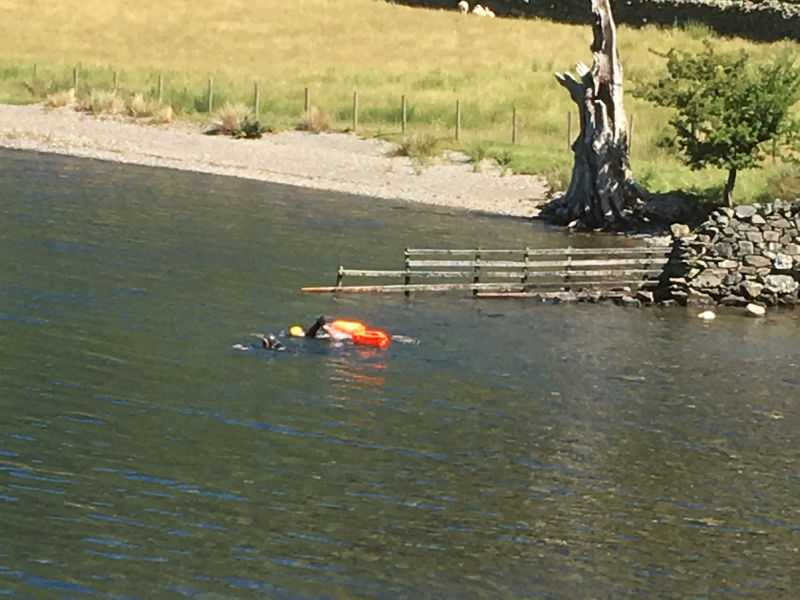 Neil had upped the pace, trying to make up for lost time and I really struggled in the heat to keep up but somehow we managed to reach Crummock Water only slightly behind schedule. I was already knackered and part of me wanted to give up but I didn’t want to let down the people who had given up their free time to help. Also, I desperately wanted to get in the lake and cool off. So off we went. Once again the swim was great, Stephen spotted Low Ling Crag and we managed a straight line until the exit point where I got tangled in some fishing line. I’m not sure I was ready for Leg 3 but it needed doing.

Matt was there as I crawled out of Crummock Water and helped me get the wetsuit off. There was food, water, dry socks, shoes and a fresh t-shirt waiting for me and Leg 3 began.

In theory this should be the easiest Leg but in practice it was hell. I had recce'd the route twice but had not managed to find a good way up Melbreak. I set Fiona off in front and tried to follow but the afternoon sun was debilitating. On a normal day I would do this climb without stopping but this day I had to keep resting. Fiona was wonderful, patient and jolly.

The climb up Red Pike was just as painful. However, the route down off High Stile posed the biggest problem as there doesn’t appear to be one. I didn’t find one during my recce and I didn’t find one on the day. We floundered around wasting time and eventually stumbled upon a path which we knew headed in the wrong direction. We took it anyway just grateful to be off the boulders and resigned ourselves to a couple of extra miles.

We arrived at Horse Close somewhat behind schedule but I had a plan to make up some time. I decided that a wetsuit was not required for the swim across Buttermere, thus saving transition time; Stephen agreed and we were correct. The water was lovely and I came out completely rejuvenated.

It’s a tough climb up Robinson from Buttermere but I was feeling a bit more like my normal self – head down and get on with it. David had joined me for this section and we were watching the clock. The team had agreed that I needed to be in Derwent Water by 21.15 at the latest as I did not have a safety boat back-up.

It was a beautiful evening with excellent visibility and the temperature had fallen slightly so we upped the pace. We arrived at Otterbield Bay at 21:05, just in time to get the wetsuit on and get going on the final swim. However, Stephen, my swim buddy, was not there. I was devastated: I couldn’t go alone as he had my wetsuit (necessary for this much longer swim). I thought it was all over. David and I walked back towards the car park at the bottom of Catbells and bumped into Julie who had been waiting for us. Julie insisted that Stephen was at Otterbield Bay so we retraced out steps and found him. We had been on the wrong side and had somehow managed to miss him.

By this time it was approaching 22:00 and the light was fading. I said I wanted to swim but would accept Stephen’s decision.

The Derwent Water swim is the most challenging of the 4 and includes 3 islands which must be crossed on foot. I really enjoyed swimming from island to island, but did not enjoy the excruciatingly painful bare foot runs across sharp stones. There were people camping on St Herbert's Island who looked quite bemused as we emerged from the dark water, ran across the island and swam off the other side.

It was properly dark when we left Rampsholme Island but David and Julie were on the far shore with torches and as we swam towards the light, I thought of turtles swimming towards the moon.

Getting out was difficult. No point fully removing the wetsuit so I put on some shoes and a t-shirt and trotted to Moot Hall.

It was party time in Keswick. There were lots of "Bob Grahamers" milling around and I got a few strange looks as I posed for my photograph on the steps. We popped into the pub for a pint of shandy and I bumped into an old friend, Peter Booth, from my Everest Marathon trip almost 13 years ago. He had been supporting a gent called Harry, aged 71 from Rossendale, on his Bob Graham Round. Much chatting and reminiscing, I didn’t feel tired at all, just happy and relieved and so very grateful to my brilliant team who gave up their time to help me have a proper adventure in my favourite place. 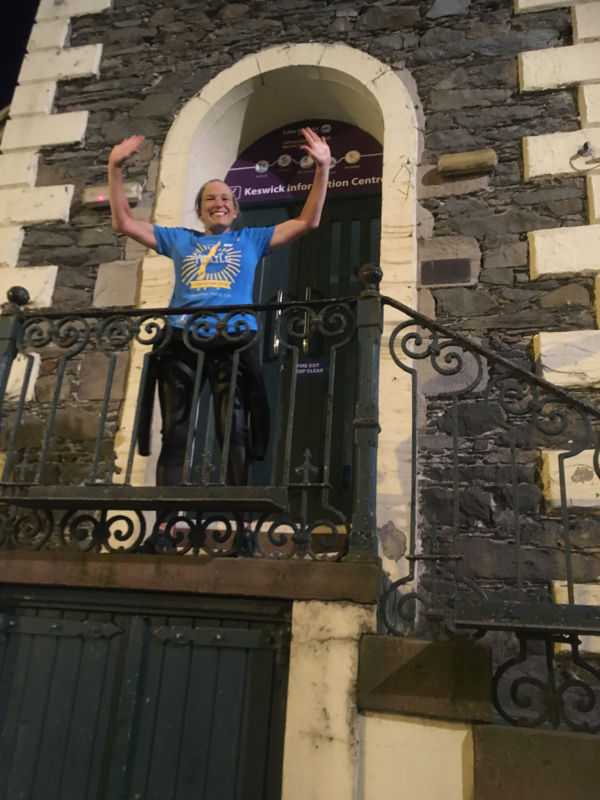