Before this year, I had run London once before in 2013. I have to admit, I didn't particularly enjoy it. I didn't have a good run and sometimes when you feel like that you don't want thousands of people cheering you on along the way! But I had a "good for age" and "Boston qualifier" after Manchester Marathon 2018: I couldn't be bothered to travel to Boston, so that left London.

Given my 2013 experience, I was a little apprehensive going into this year. People say London isn't a PB course: too busy, you'll run further than 26.2, it's often HOT. However, my training had gone really well, I'd run more miles than ever and conditions on the day were cool and dry. I didn't have any excuses. The day before, Mark, who I have run with for the entirety of my nine-year career at the Harriers text me and said: "be brave and commit". I kept that mantra in mind as I travelled to the start line. 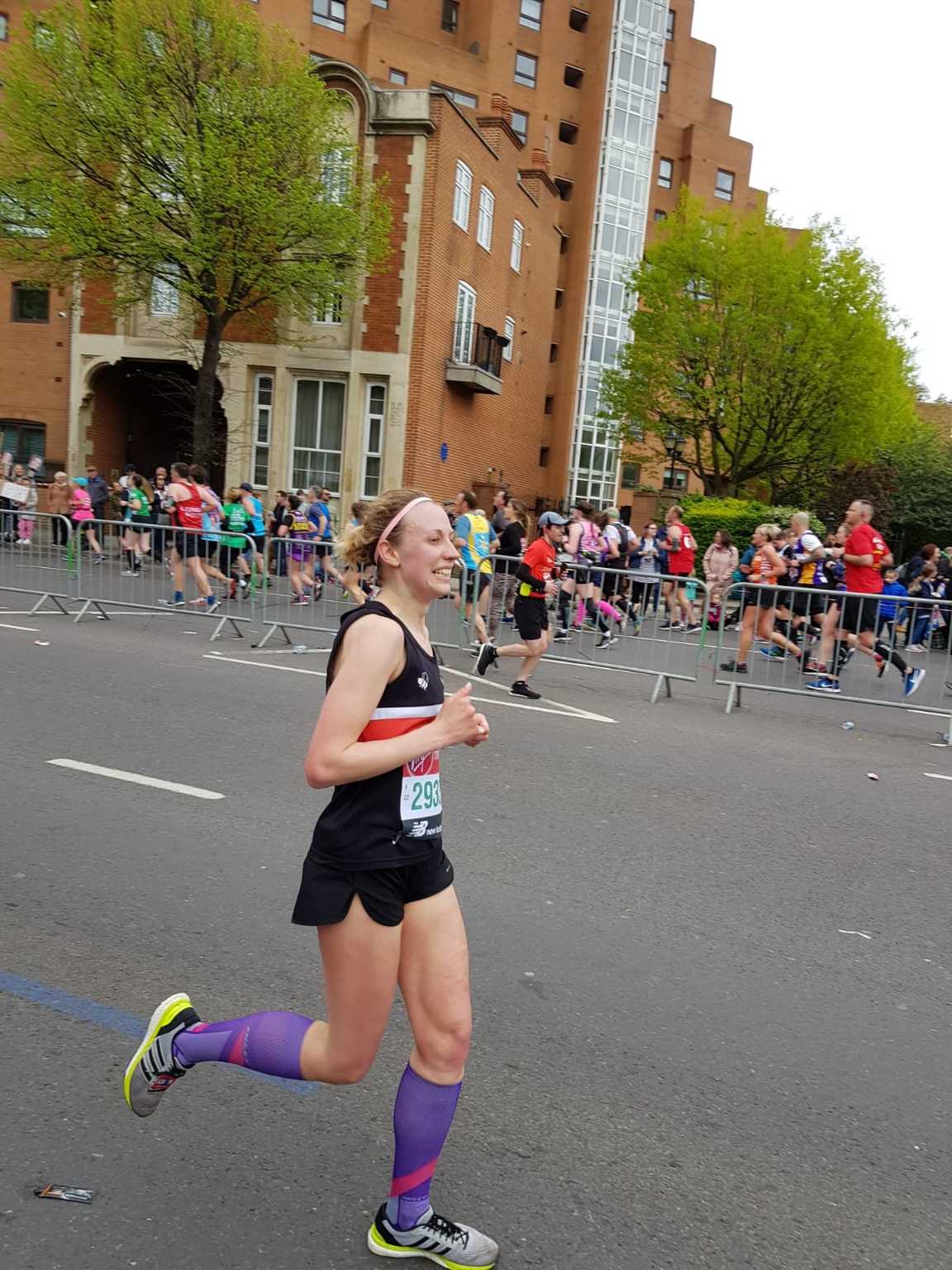 There were four Harriers running this year at London – myself, Craig Jones, Joe Hayes and Heather Hughes. We were lucky to be joined by a contingent of supporters from the club including, Chris, Jen, Sarah Wilson, Emma Rettig, Graeme, Phil and our London representative, Pete. I also had Kev, all the Brierleys and a group of my University friends out on the course.

There are over 40,000 runners at the London marathon and 3 different starts. I was in the smallish green start which is good as there are less than 10,000 runners so you get over the line quickly – apparently, it's the celeb start too but I didn't spot any. Our Craig was in the championship start (sub 3:15 women and sub 2:45 men if you're interested) so he was warming up with Mo! 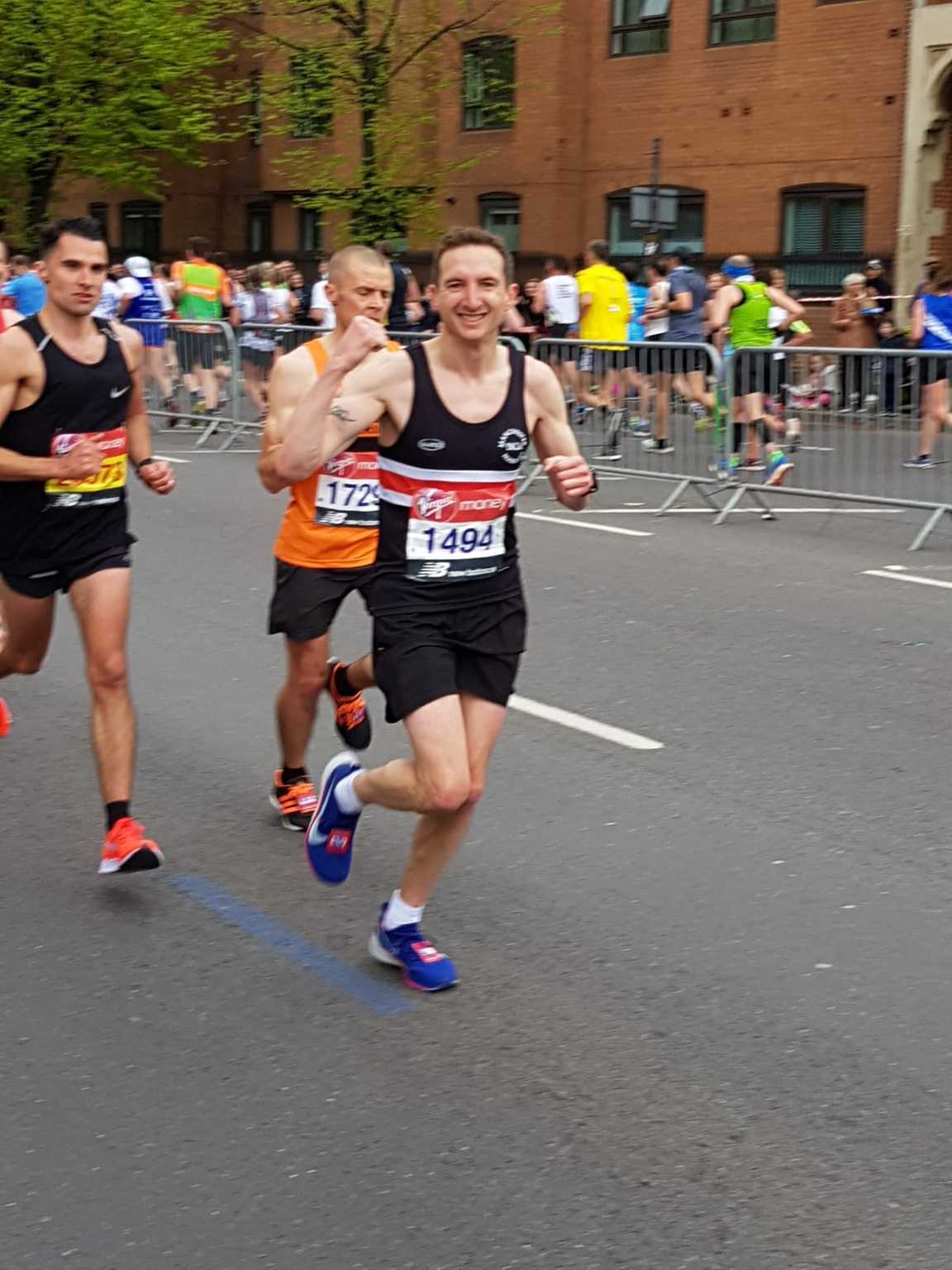 The course starts in Blackheath, snaking its way to Greenwich and the Cutty Sark. It crosses Tower Bridge and the river just before halfway followed by an out and back section including a loop around Canary Wharf. Finally, the route makes its way along the Thames, past Embankment to Big Ben and then turning towards Buckingham Palace and the iconic finish on the Mall.

I had decided to set off at about 3 hours 20 minute pace (just under 7:40 minutes per mile) which I knew would be a bit of a gamble. At the start, I forced myself not to get carried away – easily done as the mile 3 is a big downhill. I concentrated on locking into a steady pace and after about 6 miles or so this started to feel comfortable. 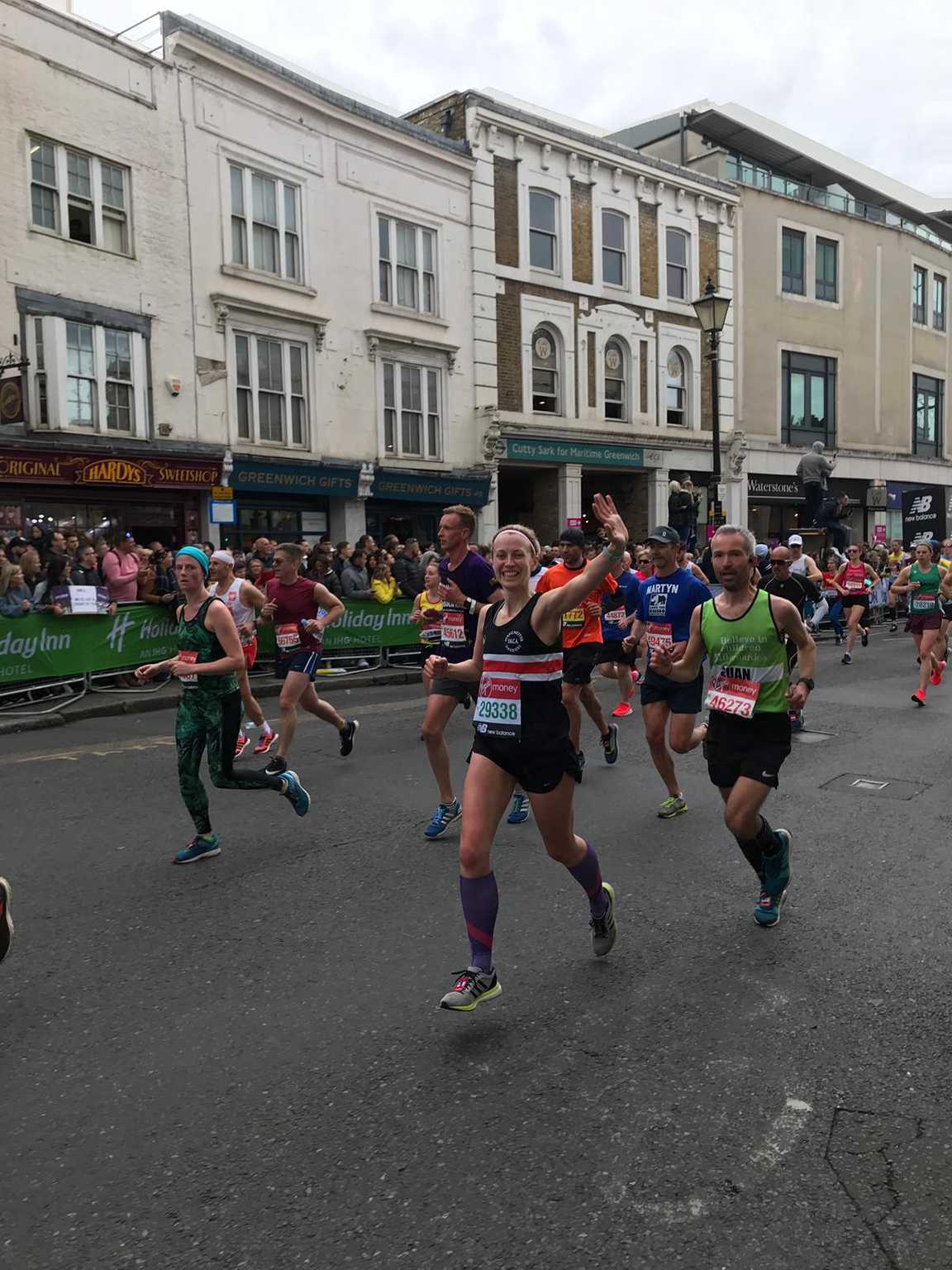 The atmosphere at London is electric pretty much the entire time but there are certain points which will give you goosebumps – the Cutty Sark at mile 6 is one, Tower Bridge just before halfway is insane and the final 2-3 miles is pretty much a wall of noise. It's incredible!

This does make it quite difficult to spot your supporters. My biggest tip is to know where they are going to be so you can look out for them. I knew roughly where everyone was and managed to see Kev twice, Sarah twice, uni friends twice, Harriers twice and Brierleys 3 times – as well as 2 appearances from Heather's sister. It’s such a boost to see your supporters and know where to look for them.

I managed to maintain a fairly steady pace until mile 16/17 where I had a bit of a wobble – it was starting to feel a bit tough, was this going to be the beginning of a very difficult 10 miles? This has happened to me before and it's a long way to go when you feel rubbish. Thankfully, I saw Kev around this point and also had a gel – somehow, this gave me a second wind and I suddenly felt good again. Mile 19 was my fastest mile. 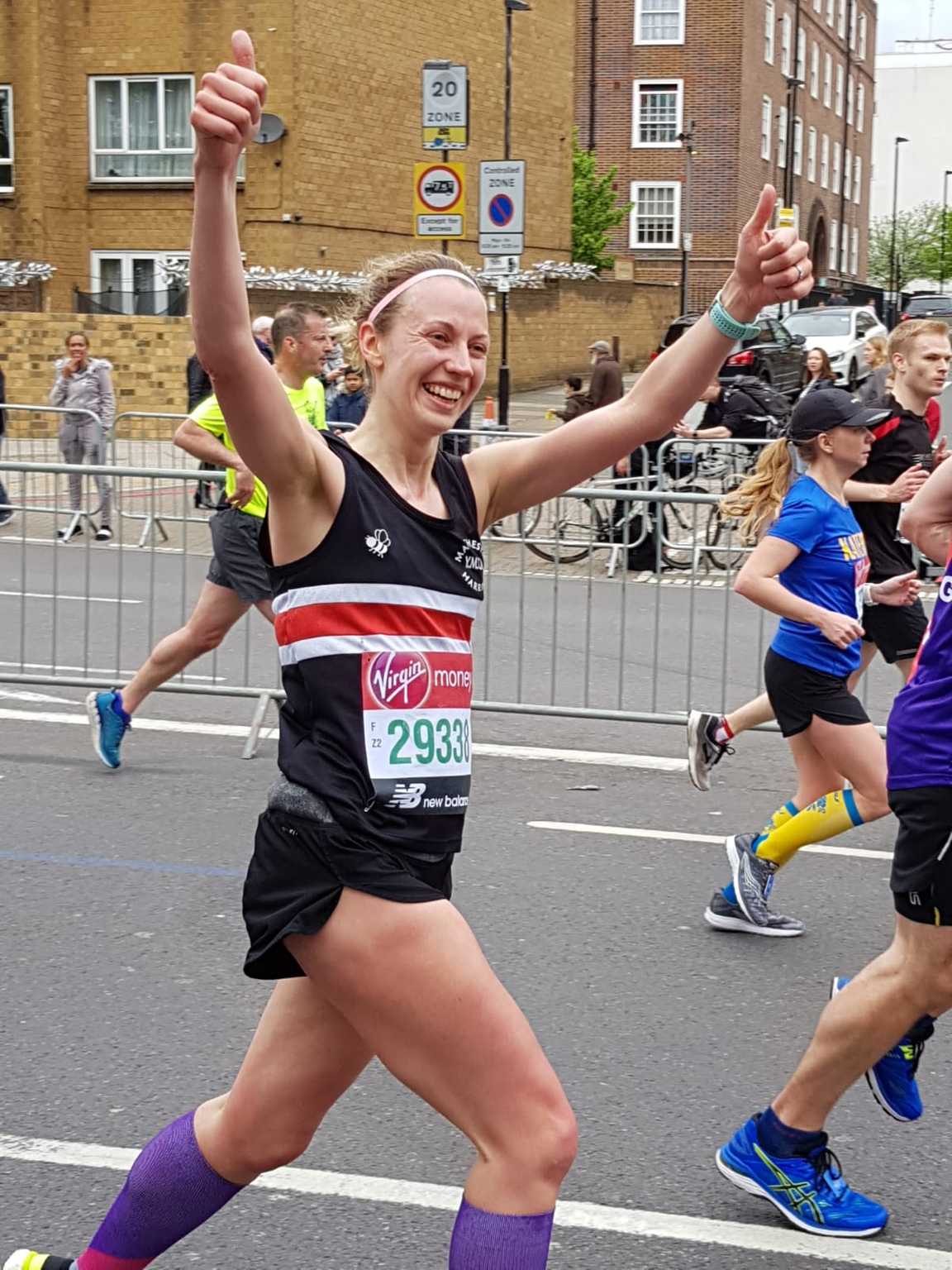 I continued to feel strong for the next 5-6 miles. If you feel good at this point, it's a massive advantage because everyone around you is flagging. I must have passed hundreds of people and it really is a death march for some to the finish. After mile 23 I was starting to feel tired again but at that point I knew I only had a couple of miles to go and knew I was on for a PB, barring disaster. Mark's mantra was running through my mind the whole time and I held on to that thought until the finish. (As well as counting to 100 over and over again for the final 2 miles – if it works for Paula Radcliffe...)

It's difficult to describe that last mile past Big Ben towards Buckingham Palace and the Mall. It's iconic. I made sure I soaked it all in and used the crowd around me. London is worth doing just for that.

I was over the moon to cross the line in 3 hours 23 minutes. A 6 minute PB and a time I am really proud of – somehow, I managed a very consistent race with only 30 seconds between my fastest and slowest miles. It's an amazing feeling when all that hard work and training pays off. 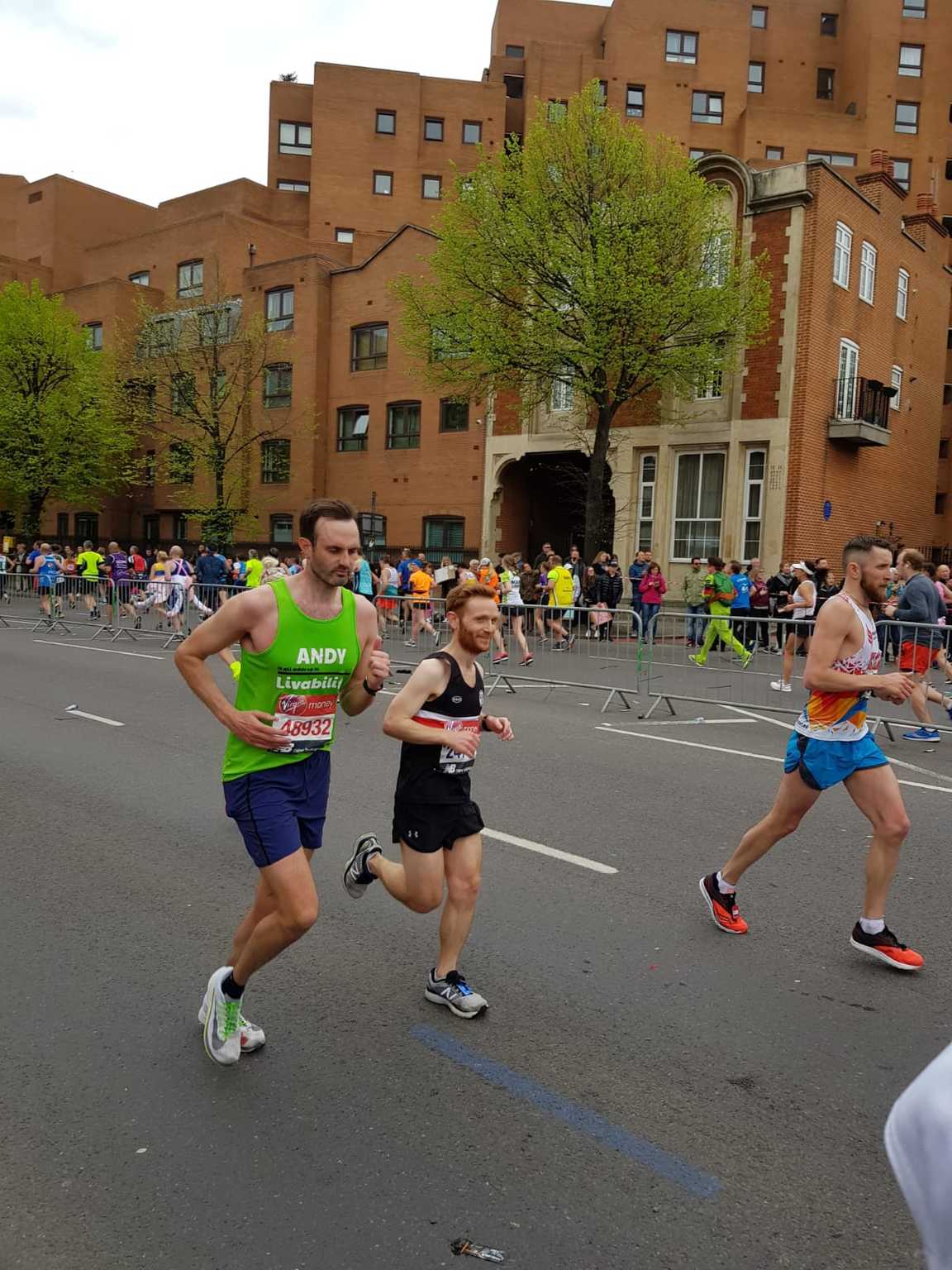 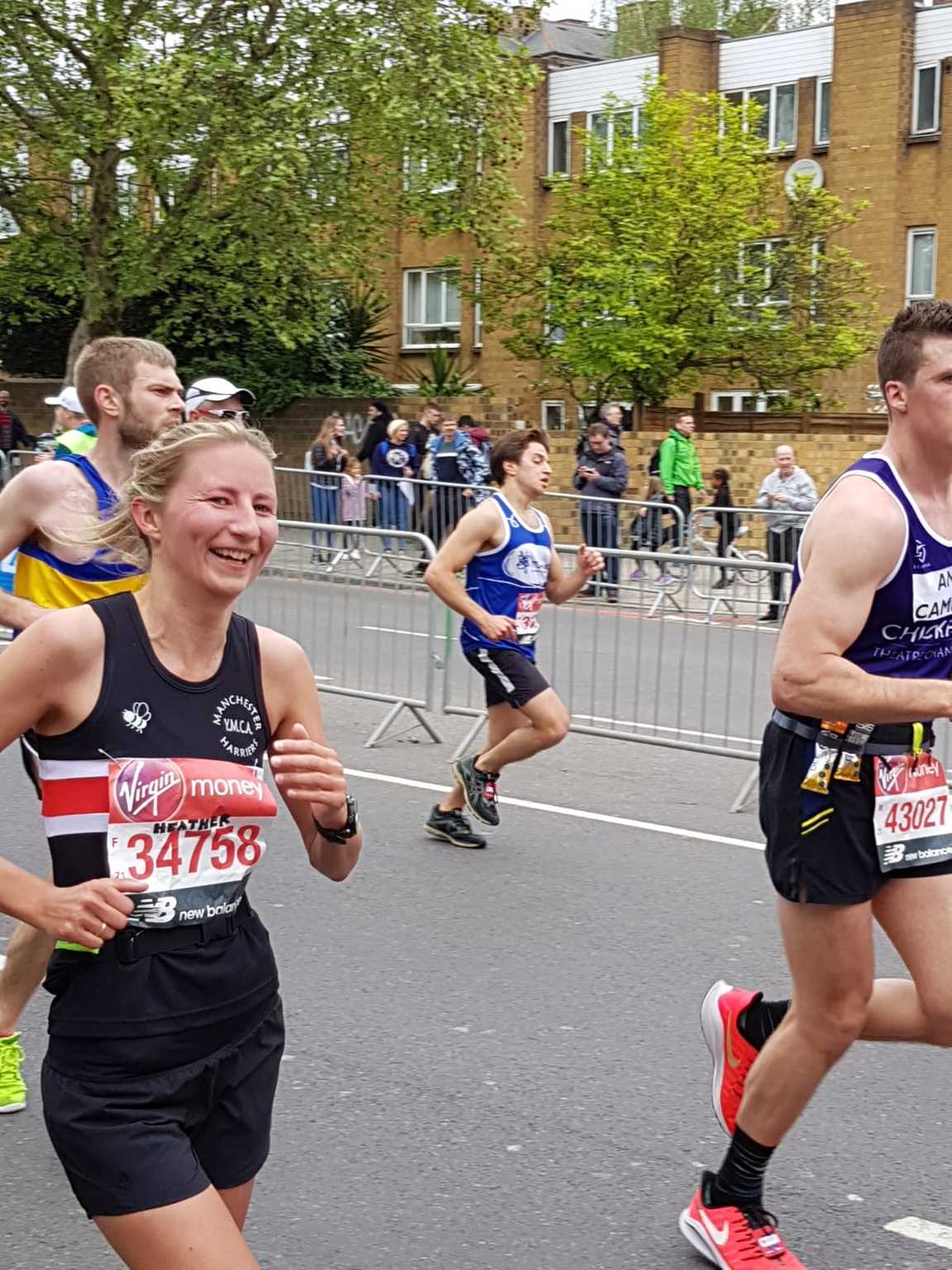 I feel really fortunate to have had that special London experience – it was magical and I was buzzing for days afterwards. I couldn’t have done it without the Harriers, who helped to get me through all those hard winter months of training, and Sarah and Heather, my main training partners who push me to be better all the time. This club is the best! 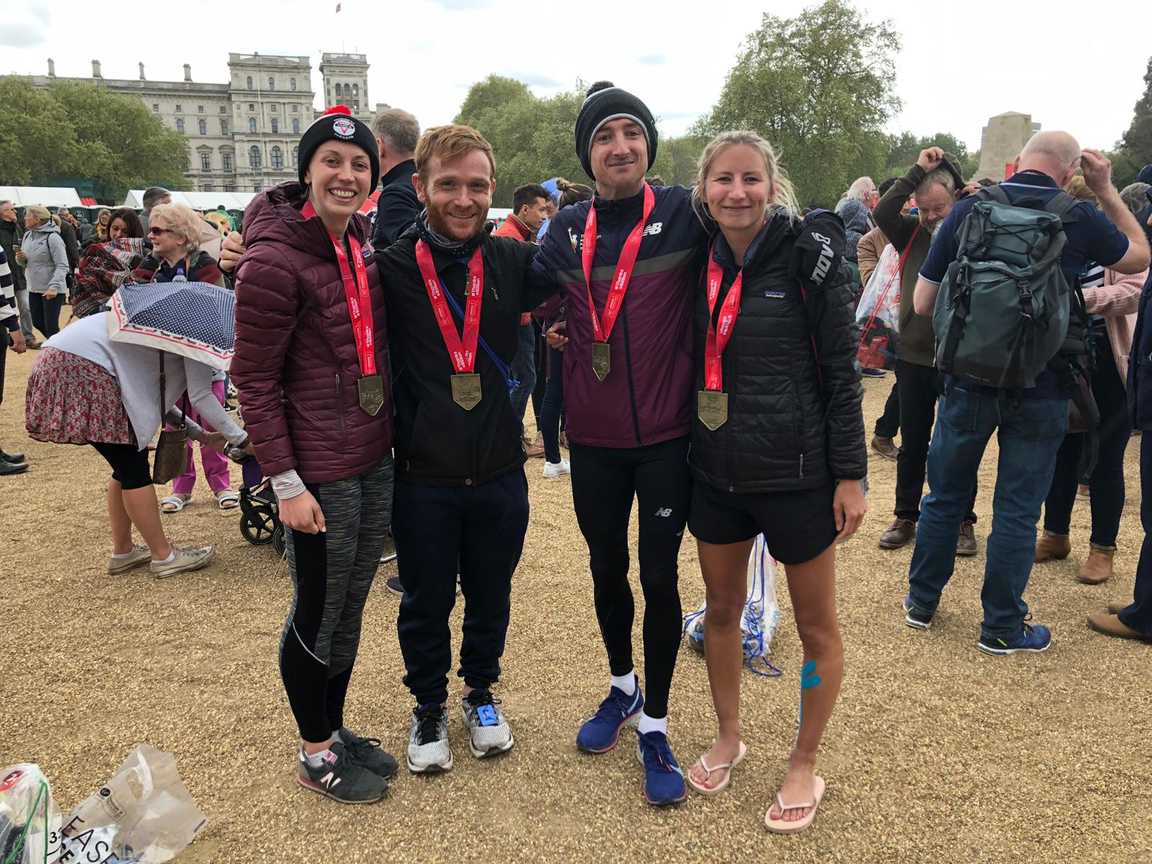 If you fancy giving London a go remember we get a club place every year. Priority goes to those who have:

If there's more than one person meeting these criteria then the committee pull the name out of the hat but you have to be in it to win it. Good luck!