Argentina and in particular Buenos Aires had been a place that I'd longed to visit ever since watching grainy videos of the 1978 World Cup as a football mad youngster. Friends who had been had told exciting tales of their adventures in the city known as the Paris of South America, and so when I was researching autumn race and holiday destinations and found out that there was a September marathon in Buenos Aires, my search was over.

As I stood on the start line on the morning of the race however, my nerves were high but expectations were low. My training had gone well over the summer, and the weather conditions were perfect on the day, but experience from previous races told me that the combination of a long journey, jet lag, time zone differences, and a very early race start (7am for this one), have previously made it difficult for me to run at my best in those circumstances. To compound matters, since arriving in Buenos Aires 3 days earlier, my diet had pretty much consisted exclusively of enormous steaks, and I had of course sampled a glass or two of the famous Argentinian Malbec. This wasn't the carb loading preparation which is advised in all the literature. I had always wanted to watch a live football match in Argentina, and so on the night before the race I got the chance to tick this off my bucket list by watching the famous Boca Juniors play, and whilst it was without doubt the fantastic experience I'd hoped it would be, it meant that I didn't get back to my apartment until almost midnight – hours later than I should really have been asleep on the night before a race. In one final twist, after finally getting to sleep and with the alarm set for 4.30am, the neighbouring apartment decided to have a very loud and very wild party starting at 1.30am. So after managing only a couple of hours' sleep, to say I was concerned that my race prep was less than ideal would have been an understatement! However as with most races, once I was stood on the start line, I decided that my plan was to set off at close to PB pace and then adjust later on depending on how I was feeling. In for a penny, in for pound – I may as well have a go for it after travelling all that way!

As the gun went off, I tried to settle into the race but for the first 5k or so the course was quite undulating and I wasn't feeling as comfortable as I would normally expect to be so early on. I was behind my target pace and my legs were feeling heavy. My fears about the less than ideal race prep and the difficulties of foreign races felt like they were about to spectacularly come to fruition. Because of this I didn't push too hard in the initial stages, and by 10k I found myself in a group of about 15 runners that had broken away from the main crowds, but I was starting to get dropped as the rest of the pack had picked up their pace and were slowly pulling away from me. I had to make a quick decision; should I push on with them and risk blowing up spectacularly due to going out too fast, or should I back off, play safe and try to battle on alone? I looked back and there didn't seem to be anyone in sight behind to run with so I decided to gamble and put on a burst to bridge the gap back to the group and tucked in behind them, in the hope that they would pull me along whilst I settled into the race. This is a tactic I often try to use in races - I find that locking in with a group who are running close to the right pace is far easier than trying to set the pace alone for the duration of the race.

The miles ticked by and even though the group were pushing on a little faster than I was intending to go, I was starting to feel better as the race went on, and I got through the halfway point in 1 hour 18mins. If I could do the same again it would be good enough for a PB. However there was still a long way to go, and I was still worried about whether I could sustain the pace as in most races previously I'd suffered with cramp in the later stages which had caused my pace to fall away towards the end. Doing another 1.18 half marathon was going to be a tough ask. Despite this though, I was feeling far more comfortable than earlier on in the race, and it was also the first point that I'd spotted my support crew of Brierley brothers; Ric and Andy, which gave me a massive boost as they cheered me on. A couple of miles later at mile 15, and after spotting the boys one more time my confidence was starting to build - my legs were no longer feeling heavy, and the pace was feeling good despite the fact that the splits were well under target pace by this point. Whilst feeling good at mile 15 can sometimes be a false dawn, and with so long still to go it would generally be unwise to get carried away at this point, I'd not felt this fresh in a race before at this stage; so I felt it was my time to take a turn at the front of the group and push us all on. 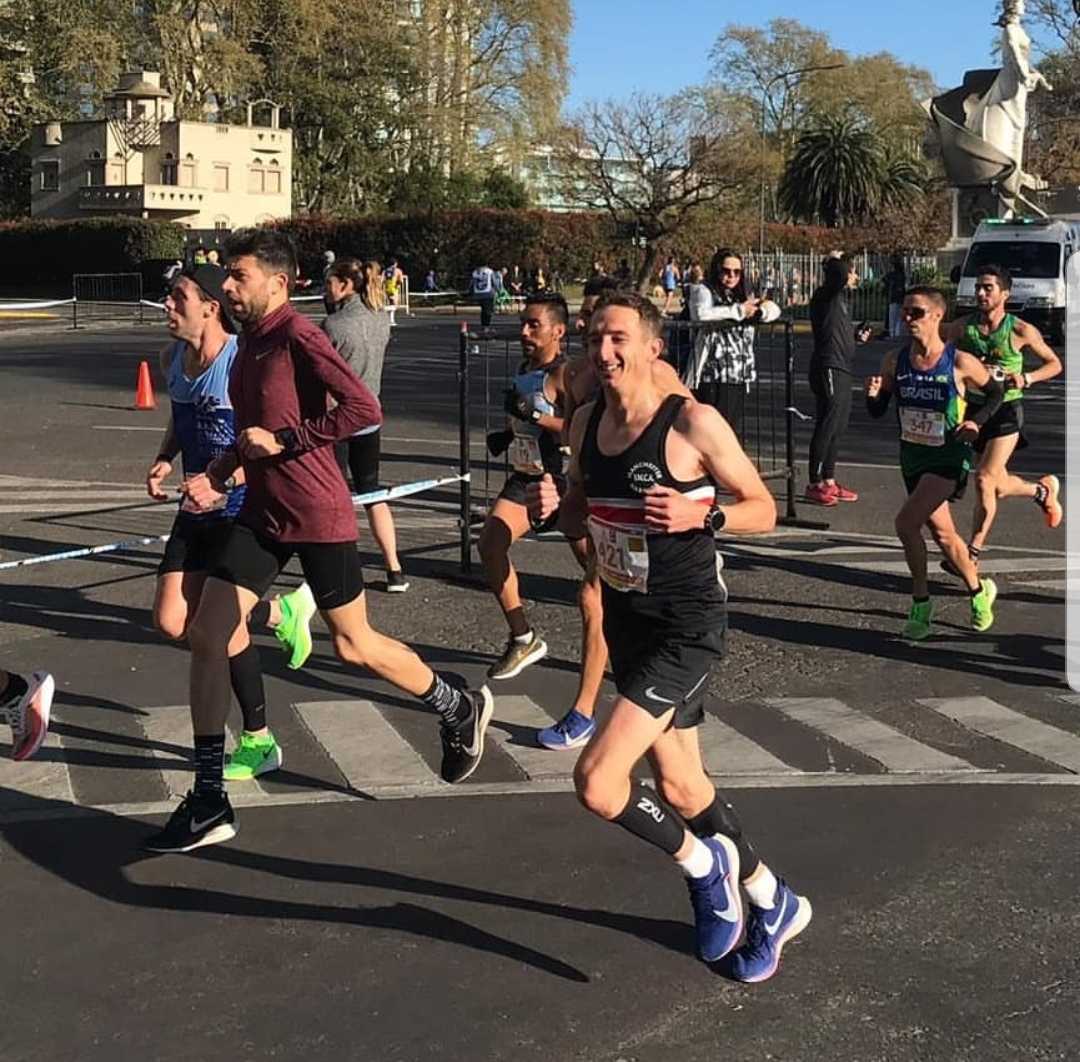 Whilst I wasn't able to exchange many words with my new running mates who were largely sporting vests from Argentina, Brazil and Paraguay, there was an unmistakable camaraderie between us as we carried each other along, each taking turns on the front like cyclists in a peloton. It felt like we were getting carried along by a relentless wave of momentum as we caught up with and swept past countless runners ahead of us in the field – it was a great feeling!

As we ran through the famous La Boca area of Buenos Aires at mile 18, our little pack started to break up as some fell off the pace, and our numbers started to dwindle until by mile 20 there was only two of us left, me and a Brazilian runner dressed all in black, running side by side. We were already motoring along, far quicker than I had ever managed at this stage of a race before, but I felt him pick up the pace still further on my shoulder, and whilst I wouldn't normally even contemplate speeding up at mile 20, my breathing was under control and my legs felt strong so I decided to go with him.
I spotted Ric and Andy one last time at mile 24, gave them a wave and pushed on for the finish. I knew by then that a PB was very much within my grasp barring a spectacular disaster, but at that point I started to realise that sub 2.35 may be possible if I was able to maintain this pace.

Anyone who has done a long distance race and has tried to do mental arithmetic in the later miles as you try to calculate what pace you need to run in order to achieve a certain time, will be familiar with the concept of ‘marathon maths'; but needless to say, by the time you've ran 20+ miles with your body and mind about to give up, doing maths is hard. So I gave up trying to work it out and just decided to run as hard as possible to the finish instead. As I negotiated the final bend and saw the finish line, I knew that I could do it and summoned up my last ounce of energy for a sprint to the finish and crossed the line in 2.34.18 – a 3 minute PB! I couldn't quite believe that my best performance, and the strongest I'd ever felt in a race came despite such challenging circumstances - maybe there's something in this steak & Malbec diet after all... 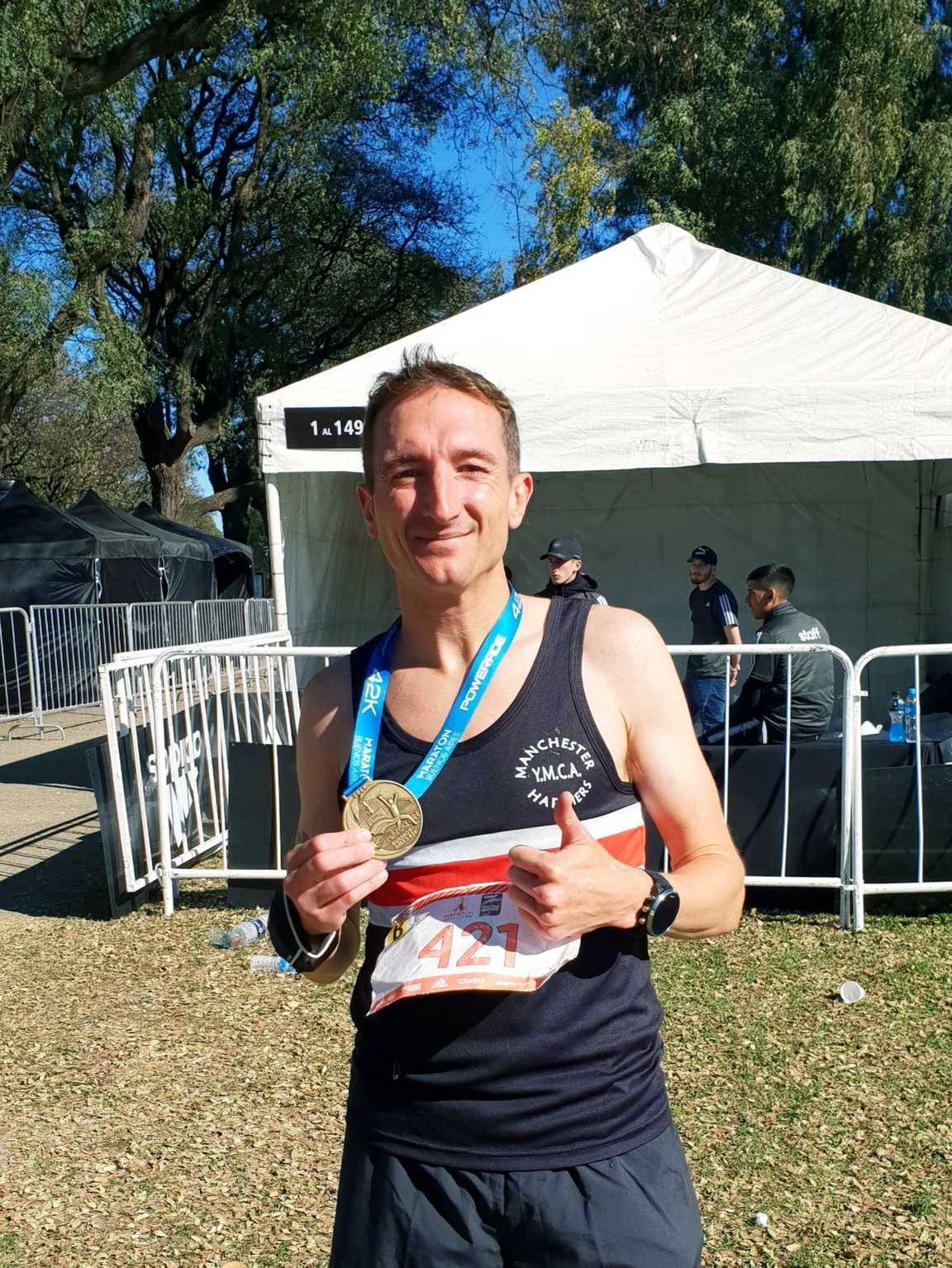