Me and Dan were so excited about this year's Endure 24 Leeds event. We first ran the event back in 2019 (aka the last proper year on record) as a mixed team of 5, but this year we had upped our game. We had somehow coerced (ahem, I mean persuaded) 10 of our friends to take part – making us a grand total of 12, two teams of 6, with me and Dan each playing the role of team captain. Dan was adamant that this was not a competition, but I was well aware that strategic decisions had been made when formulating the teams – he's my husband and I know his game!

A bit about the event

Endure 24 takes place each year at two locations – Bramham Park in Leeds and Henley in Reading. It is a 24-hour race starting at midday on Saturday and finishing at midday on Sunday. The course is a 5-mile loop on undulating trail terrain which you run as laps. You can take part as a solo participant or as part of a relay team. The event is nicknamed the 'Glastonbury for runners' and there truly is a festival vibe. Everybody camps, there are a number of excellent food and drink vans, and even a dance tent to show off your moves. Family and friends, including dogs and children, are all welcome. 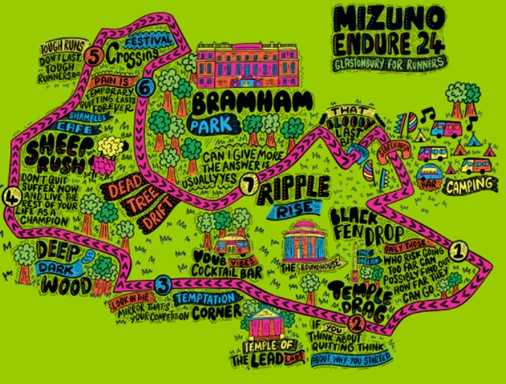 Part 1: Let's get this show on the road people!

We all arrived on Friday afternoon and set up camp before heading down to the start line for the Friday evening kids (1 mile) race. Our group entered 3 small humans plus our dog (Tash) into the event while the rest of us 'supported' with beers and pizza in hand. The kids did well, my friend's 9-year old won third girl which was no mean feat as there were plenty of much older kids competing (potential future Harrier?). Tash won second dog, but as she is 10 years old and clearly a female veteran she won her category in my eyes. She was also chaperoning a 4 year old dressed as Captain America and a 6 year old dressed as a fairy so I do feel she held back slightly. For the rest of the evening we ate, drank and made merry before hitting the hay.

The next day we awoke to the race day buzz and headed down to the start line. I kicked off proceedings for my team and at 12:00 I had crossed the start line. Let the 24-hour countdown commence! For the rest of Saturday our handovers went off without a hitch. We had some rain until 2pm when it was bright sunshine for the rest of the day. Between laps you get into a routine of eat – shower – rest – run – repeat. As our teams were of very mixed ability we took a laid back but efficient approach to our race. By this I mean, we ran gentle laps, made efficient handovers and had a lovely time chatting with everyone throughout the day.

This particular Saturday was the day of the England-Ukraine quarter final and the organisers put the match up on a big screen next to the start line. Luckily me and Dan and already accounted for this in our race preparations and after a lot of Strava stalking we had managed to calculate the running order to allow the football fans to watch the game while the not-so-bothered folks ran during this time.

At around 10pm I was waiting in the changeover section to start my third lap and an announcement was made that a storm was approaching. However, the message also stated '...but we can see everyone is having a nice time watching the football so until the rain hits carry on'. I asked a few of the other competitors if they were still planning on going out and they said they were. After all, what's a bit of rain when you're from Manchester?! So, I tagged in and set off.

I was about a mile in when the rain started and lets just say it was slightly more than a shower. To put it into context I was inhaling water and my pants actually filled up like a balloon which is a first for me. It got really dark and through the rain I could make out bright flashes of lightening and loud bangs of thunder in all directions. Dan actually rang me saying everyone had been evacuated to their cars and I had to 'get to safety'. He was having a flap. Also, really useful advice – get to safety – while I was running I was wondering if the safest place would be for me to stand under a tree or the metal shelter at the halfway checkpoint as these were my only two options if I stopped. Needless to say I carried on running, I reckoned better to be a moving target and get round rather than just stand there. Anyway, I got round the course in just a minute slower than my first lap which I was pleased with considering conditions were slightly more than adverse. Admittedly the fear of being struck by lightening did spur me on a bit.

When I got back, the place was deserted and the race had been put on hold until the storm passed. At our camp, the team had managed to squeeze 10 people and 2 dogs into a campervan like some sort of weird gameshow. Apparently lightening had struck really close to the campsite so that's why Dan was flapping and everyone else was sardined. We waited a few hours, the rain stopped, and at first the organisers said that the race wouldn't restart until it got light so some people who lived close by drove home for the evening, intending to come back early morning. The rest of us got into our tents to get some sleep.

Part 3: We got knocked down, but we got up again

We had been in our tents for about an hour and then another announcement was made that the race was back on... now! Dan shot up and started rallying the troops that were left. I'm honestly not sure how he managed it, considering everyone was tired and wet, but he managed to get members of each team to go out in pairs over the next few hours. I think he might be distantly related to Derren Brown. I got up and tagged back in at around 4:30am for a double lap while WhatsApping the rest of my team to arrange the running order for the last 6 hours of the race.

What happened next was truly magical, folks who had gone off site for the evening arrived back fresh and the teams assembled. Some did double laps and we pushed it right up until the finish at midday. Overall, my team managed 23 laps, while Dans team managed 24 laps – so pleased and proud of everyone! We all ran in for our team photos and had a cornetto to celebrate.

What I love about this event

The main reason I love this event is that it is for everyone of all running abilities. If you want to be competitive and run it really freaking fast you can. Equally, if you can only manage a few laps you can still have lots of fun. This year, one of our team had done couch to 5k in April and at the event in July she ran 3 laps (15 miles). The event gave her so much confidence that she's just signed up for a half marathon in September. Brilliant!

Finally, I wanted to say a massive thank you to the Manchester YMCA Harriers. I first ran this event before I started running with you guys. This year, each of my laps was 5 minutes faster than in 2019 meaning that my pace has improved by 1 minute per mile. I couldn't be more pleased! Here's to more training, more races and more PBs!

For more pics and clips see our video: https://youtu.be/uUpGMN1vX_U 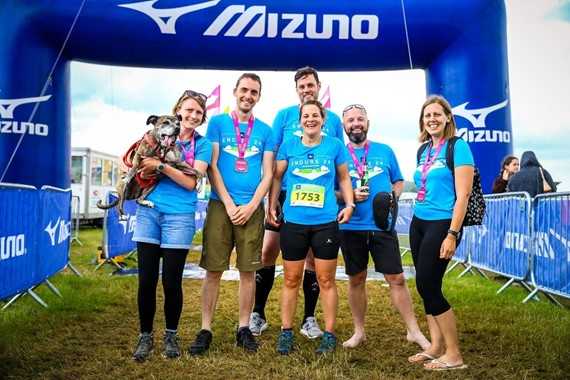 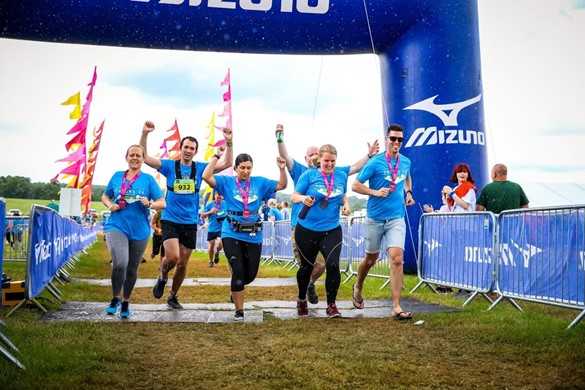